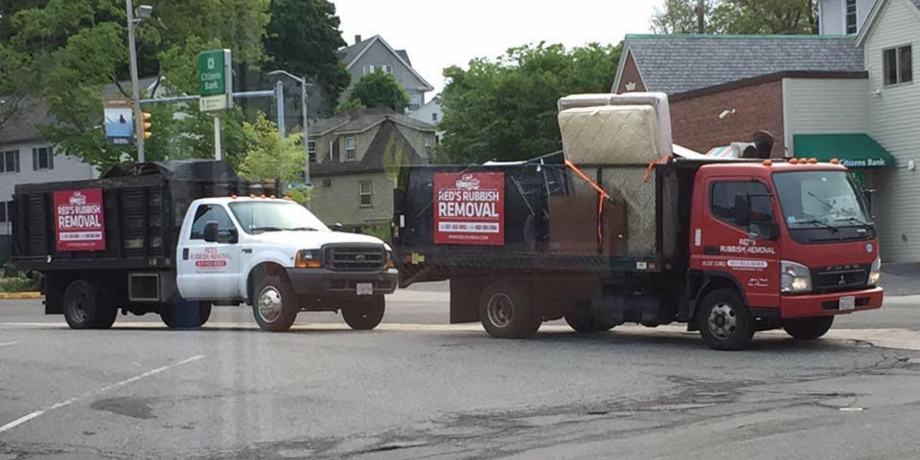 What our customers say about us

"I had to knock out some cabinets and shelves in my basement and rip up some old vinyl flooring.  After doing so, I realized that I had a large pile of derbies and that the boiler company was coming that day to replace my boiler and there was too much stuff in the way!  I considered hauling all the stuff from the basement, through the bulkhead, and around to the front of the house but my back hurt just thinking of how much work it would be for me to do quickly.  Panic set in.

After finding the ad for Red's on the Craigslist, I called them and left voice mail at 7am on a Tuesday.  At 8:30 they returned my call.  I sent them a picture of the pile of junk.  They quickly called back and quoted me a price and said they could be there at 10:30am to remove it.  I hastily agreed, left a check with the boiler people, and at 11am, I got a picture sent of a cleaned out basement and they were on their way out.  PERFECT.  Problem solved.  That was awesome.

Nothing ever goes right with home improvement projects.  People are always late or don't show up at all.  This is not true for Red's Rubbish Removal and I wish everyone was like them.  Very grateful for great service, quick turnaround, and decent pricing.  I would definitely recommend them for your trash-y needs!"- Brandon V, Waltham, MA.

"I mean come on, how does this guy not have a single review on yelp?
He was great! Got quoted $270 by another  guy "so called professional" and Tim did it for $125!
Awesome, fast, nice, respectable! He even disassembled 2 large rusted items that wouldn't fit otherwise.
Have before and after pics to prove it.
Ill recommend him to anyone!"- Dan, Londonderry, NH